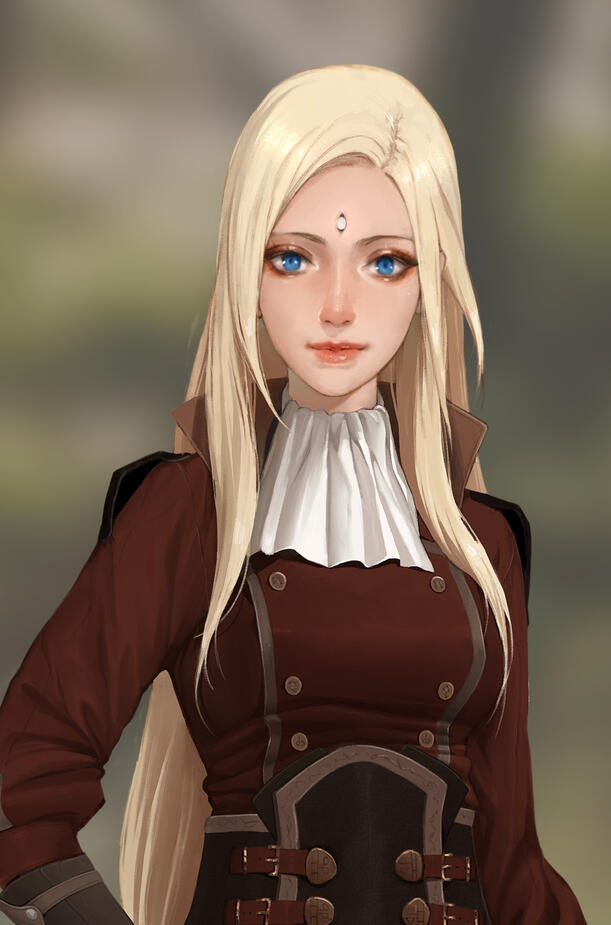 Lucretia was born and raised within the Garlean Empire as a member of the Royal Family, though far removed from succession. Upon the death of Emperor Solus, Lucretia fled to Eorzea to escape the conflict of succession. As she fled, Lucretia bore witness to the horrors her people had enacted on the outside world, and has since worked to ever help in stopping the Empire's war ambitions.During her time in Eorzea, she is sheltered by Cid and given a station within the Ironworks due to her experience with Magitek, and that is where she spent most of her time, until war broke out between the Empire and the Eorzean Grand Alliance, where she would lend a hand within the logistical support teams.After the Ilsabard Contingent moved into Garlemald, and the Logistics got set up in Camp Broken Glass, Lucretia was devastated to see her homeland destroyed, and now seeks to aid the refugees who have been displaced, as well as rebuild a new Empire in which the Garleans would cooperate and work with their neighbors.

There was a time when the name Aeliana was unknown to most Garlean patricians. That was until a brilliant engineer rose in promenince through the Imperial Magitek Academy, and eventually through the Magitek Engineering Corps. Skill and talent were both attributes that the diligent Cato jen Aeliana possessed, joining the Imperial Army as an Architectus soon after his nineteenth name day. Much like in the academy, Cato's knack for magitek was noted and by his twenty-third nameday, achieved the position of Architectus Magiteci. Married to his work, he held this position as Cato nan Aeliana, until his thirty-sixth nameday had come to pass, being offered the position of Primus Architectus Magiteci, this however, was a short lived appointment. When it was discovered that Cato had organized the Academy's curriculum around the principle of designing magitek for the purpose of man's benefit, and not weapons of war. Clearly, this ran afoul to the war goals that Emperor Solus zos Galvus had established and due to the reputation of the station of Primus Architectus Magiteci being integral to the integrity of the Academy, Cato nan Aeliana could not simply be removed from the position, thus enters Decima wir Galvus.Born as one of the grandaughers to the Emperor, Decima was always thought to be a ray of sunshine within the bleak cold of the Garlean homeland. She had no aspirations, no unique talents, or notable features other than the beautiful smile she wore almost all the time. As it was expected of Garlean royalty, Decima was prim, proper, and well refined in her manners. She was always notably cheerful in the palace when she would meet her grandfather, and with people in general. When Decima was nineteen, she was called to meet her grandfather, and upon leaving her meeting, that beautiful smile ceased to be. It was decided that Decima would be married to a man that she had never heard of, let alone met. A man, seventeen years her senior, was soon to be her husband, never having occurred to her that such decision would be out of her control. It was only a month before the marriage was official and it was said that Decima did not smile a single time.Granted a villa in the Garlean countryside, Cato wir Aeliana was forced to retire his station, due to the the new responsibilities that marrying into the royal family would entail. Having his ambitions trampled by the Emperor himself, he became a bitter man, spending his time building up his own personal workshop within the villa, neglecting his new wife. Save for the servants that attended to her, Decima was isolated without her husband. It would be three months before the two would feel the pressure to produce an heir and a full year after they were wed for their first and only child to be born. Whereas parents are naturally inclined to feel love towards their newborn, the baby royal was met with disdain and scorn. Born Lucretia wir Aeliana, sole daughter and heiress to newly established House Aeliana, the babe was but a living token of lack of agency both Cato and Decima had. To her mother, Lucretia was a reminder of the smile that was robbed from her. To her father, a reminder of the career taken from him.- -----------------Growing up-----------------
Growing up, Lucretia knew not the love of her parents. As a young girl, it was said that she had the same beautiful smile of her mother, though, barely would have the opportunity to show it off to others. The villa had been staffed only with the bare minimum of Palatinus. Decima saw to it that her personal servant had come over to her villa, and enough to make sure that Lucretia was raised proper. With the aide of the servants, Decima and Cato were able to more or less--------------------Leaving
Following the death of Solus zos Galvus, violence loomed within the capital as before Solus was even laid to rest, Nevra and Varris were laying claim to the throne, both having the means to take it. 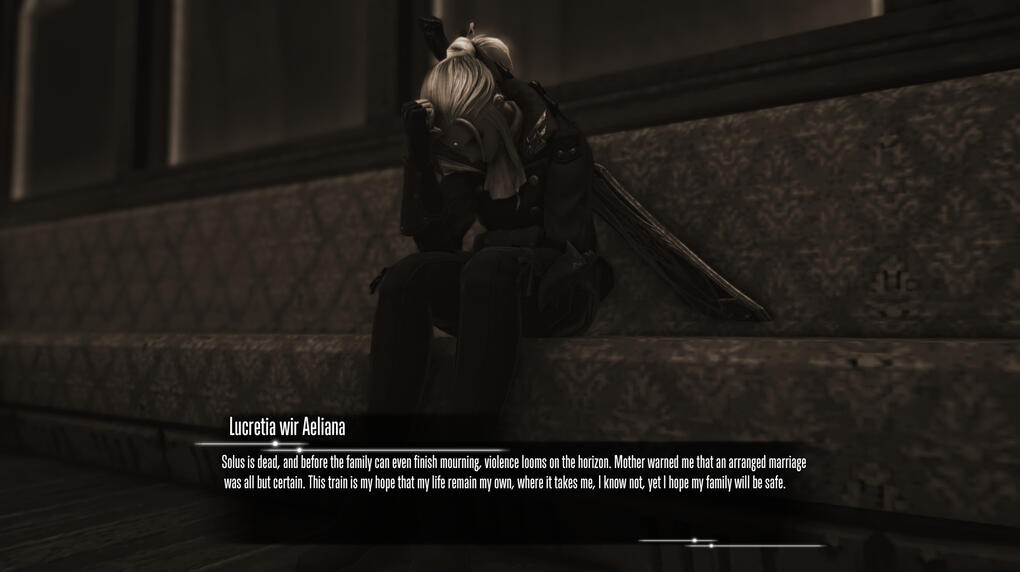 Lucretia arrived at Eorzea recovering from the devastation of the battle at the Carteneau Flats. People were displaced, starving, suffering, and the land was crying out for any semblance of hope. When the vessel carrying her docked in Limsa Lominsa she exited the vessel with her third eye concealed. In a sickened stupor from her long voyage, she stumbled along the dock towards the Lominsan Customs desk. Lucretia witnessed those ahead of her having to declare themselves. Thinking quickly, she gave the name of a Garlean boogie man she had read about in her father's study during her lessons on Garlean folklore, Amdusias. Lucretia, now Amdusias in this new land, did not declare a family name but instead stated she was without a family. Despite her anxiousness, Lucretia was granted access and set forth almost immediately. She dedicated the early days of her arrival to exploring the lands scarred by the red moon. From Limsa Lominsa, to The Black Shroud, to Thanalan, Amdusias traveled, seeing the displaced Ala Mhigans outside Ul'dah, to the starved poachers in the Twelveswood. There was so much strife and loss in these lands and tensions between the city states were high.Equipped with almost nothing but her clothes and a gunblade.When Lucretia stepped foot back in Garlemald propper for the first time since her departure, she was in shock, driven to tears, and inconsolable. The nation for which she loved and wished to redeem was brought unto destruction. The smoldering remains of what was once a prosperous and bustling city shattered whatever rose-tinted memories she had of her home. Having been brought in to aid in relations with the surviving locals, she began the process of scouring every ilm of snow for survivors, or those in need of a proper burial.Her search went on for days, weeks, and months, and the longer she searched the more despairing was the conclusion she was brought to. There had been no record of any survivors bearing her family name. Not her mother, not her father, nor her siblings have been located.Presuming the worst had come, Lucretia began to look upon the ashes of what was once her home; she sought to bring about what had been done in Ishgard and Ala Mhigo. Garlemald, she thought, could be rebuilt better and more free than the regime of the past. This however, would be a long process, as first there must be healing, between those survivors of Garlemald, and those the Empire once oppressed.

Garlean Royal: Among the many considered in the Royal Lineage of Garlemald, Lucretia's face may be recognizable to other Garlean citizens.Ironworks/Engineer: Those with experience may have found themselves in contact with the Garlean working under Cid's workshop. Those who placed orders may have had close contact with her or spoken in passing, though, she may have concealed her Garlean Identity at the time.Refugee Work: After the Collapse of Garlemald and the aftermath of the Ilsabard Contingent, Lucretia has been working with her people, helping them pick up and find a better place to resettle, as well as working to rebuild Garlemald as a new nation, one that could work with others.